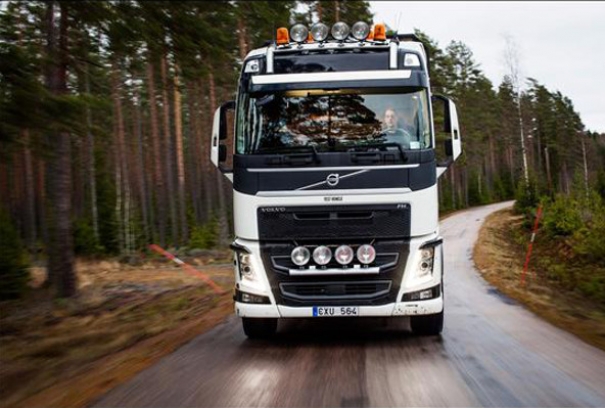 More than half of truck drivers in Europe have problems with back, neck and shoulder pain, according to a study by Volvo Trucks. New Volvo Dynamic Steering makes it possible to control a truck with minimal effort – and reduces the risk of injury for the driver. Long days behind the wheel cause many truck drivers to feel pain in their upper back. Henrik Gustafsson, 27, is one of them.

Five years ago, when driving long-haul transport to Norway, he developed a problem with a muscle behind his left shoulder. Henrik stopped driving long-haul because of this, and started driving timber in the forest with his father. He also took up weight training, but the problem did not disappear completely. However, a year and a half ago Henrik got the opportunity to drive the new Volvo FH, equipped with Volvo Dynamic Steering, in field tests.

Since then his back has felt much better. "The difference now is that I don't have to be on edge and drive in a guarded way. With Volvo Dynamic Steering the truck is very stable", says Henrik Gustafsson. Every second driver encounters problems The problems associated with industrial injuries are long recognised. In a study by Volvo Trucks involving 160 truck drivers in Europe, over half had problems with back, shoulder and neck pain. In the study, conducted in 2011 and 2012, the majority of participants were men who drove long-haul operations. Another 2011 study by the European Agency for Safety and Health at Work shows that 54% of women and 37% of men in the transport sector in Europe have muscular and skeletal problems. These are often concentrated in the backs, shoulders and necks of the drivers. Peter Bark, who conducts research on health and safety issues at the Transport Research Institute, a research institute for transportation and logistics, explains why. "Tightening muscles in the arms and neck, together with repetitive movements put a large strain on certain muscle groups. Gripping the wheel hard when steering leads to even greater tension, I would expect. Larger muscles like biceps are not as sensitive, but when tensing the forearm and certain muscles that connect to the fingers and hands, there is a risk of feeling fatigued.

Tensing the shoulders also leads to fatigue which can then spread to the back of the neck". Drastically reduced vibrations with Volvo Dynamic Steering The new Volvo Dynamic Steering greatly reduces the movements of the steering wheel, which would otherwise be created by road uneveness. It not only makes steering easier and more comfortable for the driver, it also impacts less on the muscles and joints in the long term. Driving at low speeds on normal roads with Volvo Dynamic Steering reduces the effort necessary to turn a steering wheel by approximately 75 percent. When driving on rough roads it almost entirely reduces tremors, by 95-100%. In combination with the automated I-Shift gearbox, it means that the pressure on the driver is massively reduced. Jonas Nordquist is Product Features and Profitability Manager at Volvo Trucks. "If you take away everything that can happen to the driver outside the truck, then repetitive motion from road uneveness and from steering and shifting - so-called ‘whole-body vibration' - is the biggest cause of occupational injuries.

A road is never completely smooth, the body will shake with the motion. This creates what in ergonomics is called RSI - ‘Repetitive Strain Injury'. It is a wearing of the muscle, just like tennis elbow, for example". This is exactly what happens when truck drivers get a sore back or neck - they are sitting still while the body sways up and down. He or she controls the steering wheel with a certain load and the higher the load, the greater the risk of injury. Henrik Gustafsson's back pain turned out to be a classic work injury. So, when he and his father bought a new truck, the choice was easy - a new

Volvo FH with Volvo Dynamic Steering. "Previously, I would tense up and steer the truck on small, winding roads. With Volvo Dynamic Steering the wheel is still, even when driving on bumpy roads when a force comes from the side that would normally shake the wheel. This is countered by the system so I can sit and feel more relaxed as a driver. Today I have a very different position when I drive" says Henrik Gustafsson. February 19, 2014 How Volvo Dynamic Steering works Volvo Dynamic Steering is based on a conventional mechanical steering system where a steering shaft links up to a steering gear. A hydraulic servo unit generates force that helps the driver turn the truck's road wheels. In Volvo's system an electronically controlled electric motor is added, which is attached to the steering shaft. This electric motor works together with the hydraulic power steering and is adjusted thousands of times per second by the electronic control unit. At low speeds, the electric motor adds extra force and at higher speeds, the electric motor automatically regulates the steering and compensates for irregularities that feed through to the steering wheel, caused for instance by side winds or bumps in the road surface.