Born for the Internet. 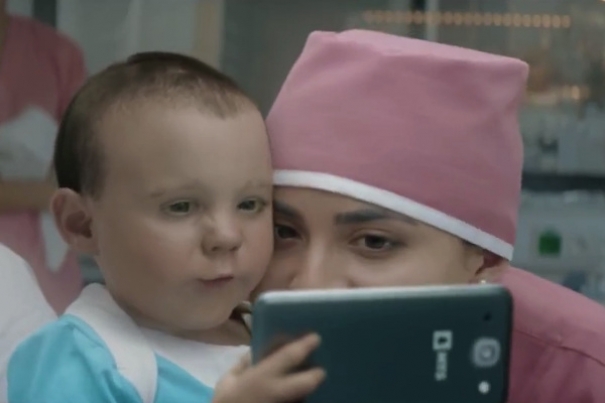 Originality is the key in the advertising industry, in particular because the recipient is becoming increasingly more demanding. Therefore, it’s worth taking a closer look at the latest campaign by MTS, which will leave a smile on the face of many a viewer.  The scene is like that of a serial or film: a woman in labor, surrounded by doctors and nurses and she is squeezing the hand of her dearest partner, who is trying to record the whole event using a tablet.

The moment of birth arrives, and... from here on what you see goes beyond what you’d expect from a standard scene in a serial.  The emerging baby snaps his fingers at the doctor, then goes out into the world alone.  He snatches the tablet from his dad, and uses it to search for a way to cut the umbilical cord. He cuts it, and then starts to fidget, falling out of the bed.  He then starts rummaging through social networking sites, takes a picture with the nurse and runs around the hospital.  Could this be yet another campaign showing the danger of open Internet access? On the contrary - MTS shows that as a child we have all been in contact with new technologies, and it is not worth fighting with this, but we should rather develop it even more.  And how has MTS developed? Well, it has opened its own 3G+ telecom network in nine districts in India: Delhi, Rajasthan, Kerala, Karnataka, Tamil Nadu, Kolkata, Uttar Pradesh (West) and West Bengal. The company has received permission to use an additional 1.25 MHz slot in the 800 MHz band. SSTL has also received a license to work with any telecommunications technology or network, including LTE 4G in India. Want to know more about the development of MTS? Click on the video!