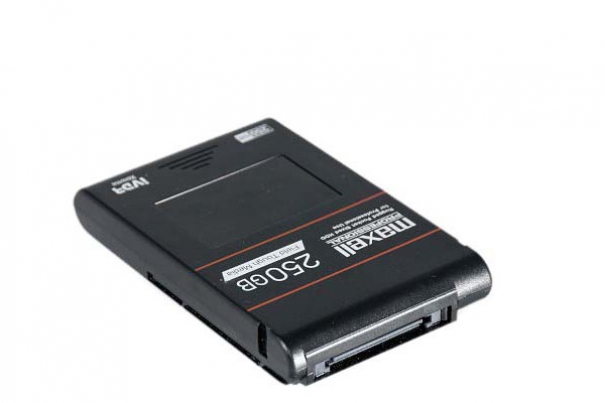 The iVDR VC102 allows any camera that utilizes the DV, DVCPRO, DVCPRO50, DVCPRO100, DVCPRO HD or HDV formats to record simultaneously to an iVDR drive.

Footage can later be off-loaded directly into an assortment of editing programs, such as Final Cut Pro, Edius or Adobe Premiere. The task of capturing files before editing them is eliminated. The VC102 also reduces the overall amount of hardware used and time required for processing.

The VC102 ships with two, 6-pin-to-4-pin IEEE 1394A (FireWire) and one, 6-pin-to-6-pin IEEE 1394A cable and is compatible with both professional and consumer cameras that utilize either interface. UA rechargeable, internal, Lithium battery powers the iVDR VC102 which can operate for up to 90 minutes* of nonstop recording* (DC power is available as an option).

The utilization of CitiDISK technology in the iVDR VC102 continues to expand the capabilities and applications of the iVDR Technology. These include rugged and harsh environments such as mobile videography, military field applications, mobile medical or forensics and mobile law enforcement applications.

The VC102 Adapter was developed exclusively for Maxell’s DR Technology. This provides reliability and ruggedness not found in other portable disk-based products. A Maxell iVDR drive has a current capacity of 250GB, enough space to record 19 hours of digital video, 110 hours of DVD-quality video, or 20 hours of MPEG high-definition video. iVDR EX is rated to withstand non-operating shock of more than 2000Gs and operating shock equal to or greater than 350Gs. Its temperature range is -40° C to +70° C, which complies with MIL standards for thermal shock. It is also rated to operate at a maximum altitude of 10,000 feet.