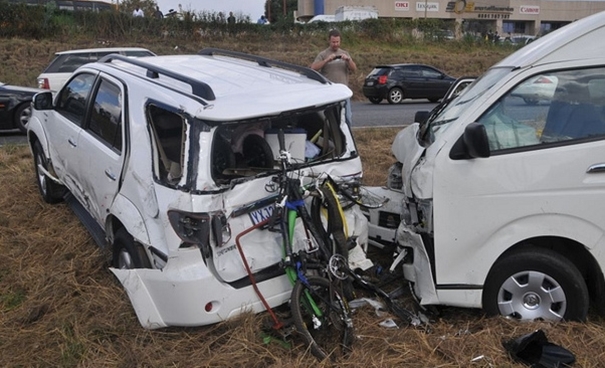 In most cases, avoiding an auto accident, whether you are in a car, motorcycle, or truck, is simply about driving defensively and responsibly—obeying the speed limit, using turn signals, proper vehicle maintenance, etc. But trucks are even more susceptible to dangers on the road because of their size and heavy cargo, which makes it practically impossible to avert an impending wreck. Being aware of some common causes of truck accidents may help you avoid them in the future.

Accidents Caused by the Truck Driver

For any long-distance driver, especially truck drivers, the risk of getting in a dangerous auto accident is extremely high. Any one of a list of possible dangers could jeopardize the lives of the truck driver, other drivers, and passengers. Errors that truck drivers can fall prey to are:

Lack of qualifications or proper training – Driving a truck is vastly different than operating any other type of vehicle, and drivers who attempt to get behind the wheel of a truck without the proper training and qualification are putting themselves and others at risk.
Unsafe driving to meet deadlines – Truck drivers are often on a strict time schedule to deliver the goods they are hauling, and sometimes the pressure can result in driving over the speed limit to reach a destination in time, causing a wreck.
Driving while impaired – Operating a truck requires all of a driver’s physical and mental abilities. Drinking alcohol, or taking drugs (legal or illegal), can impair a driver’s senses, making it unsafe to operate the truck.
Driving while fatigued – It can be all too easy to get tired during long-distance drives, and truckers who don’t stop to rest and take breaks frequently can lose focus behind the wheel.
Failure to secure heavy loads or overloading truck –The vibrations and wind of the road can shake off cargo if not properly secured. Not overloading a truck, or being sure that it is properly secured, is essential to avoiding an accident.
Failure to do proper pre-trip and trip inspections – Determining that the truck and cargo is road safe is easily done by inspecting the vehicle before it is on the road. Stopping occasionally to recheck that the cargo is secure is also important.

A significant percentage of truck accidents are caused by other drivers who make a driving error. Because of their large size and heavy loads, trucks are oftentimes unable to avoid an accident with defensive maneuvering, and crashes occur. Accidents caused by passenger vehicles include:

Driving in truck blind spots – Trucks have large blind spots that make changing lanes dangerous. When passenger vehicle drivers ignore the warning signs on the rear of trucks by staying in a truck’s blind spot, a trucker is unable to see the car and an accident can occur.
Cutting lanes in front of truck – Trucks with heavy loads are unable to slow their momentum as quickly as a normal vehicle, so drivers who cut in front of trucks risk causing a wreck.
Following too closely – Not keeping enough distance behind a truck is dangerous because the trucker is unable to see the vehicle, and the driver cannot see the traffic ahead. If the trucker brakes quickly, the other driver may not have enough time to avoid a crash.
Driving while impaired – Like truck drivers, other drivers can cause an accident by driving while under the influence of alcohol or drugs. The large, bright lights of trucks in particular can cause an impaired driver to lose sight of the road.

Crashes involving a truck are more complex than regular car accidents or motorcycle crashes. Not only must victims fight the driver and their insurance company to receive just compensation, but the trucking company is also involved.

That is why it is crucial to hire an attorney that has special expertise in dealing with truck accident cases. Consult a truck accident lawyer to seek proper representation in your case.