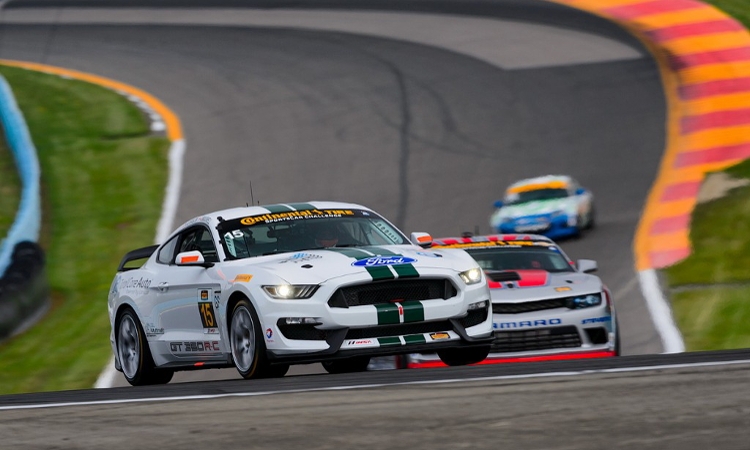 “For me, it’s more rewarding for everyone at Ford and Multimatic who have put in so many hours into development of this car, both on and off the track,” Maxwell said. “For me, it’s giving something back. Honestly, we (as drivers) have the best job and the easiest job. We jump in the car and benefit from all their hard work. Once in a while it’s nice to earn the pole and let them know all their hard work paid off.”

Multimatic will compete with the No. 15 and its sister car, the No. 158 Shelby GT350R-C, for the remainder of the 2015 IMSA Continental Tire SportsCar Challenge schedule.

The Shelby GT350R production car was unveiled in January, and is one of more than 12 new vehicles Ford Performance will bring to market through 2020. Both production and race car versions feature the first-ever production car V8 from Ford with a flat-plane crankshaft. This unique layout – typically reserved for the world’s most exotic sports cars – helped create the most powerful naturally aspirated engine Ford has ever produced.

“The Continental Tire Challenge racing is exceptional racing,” Maxwell said. “The last hour of these races is 10 professional racers going at it, and it’s as good as racing you’ll find anywhere. At lot of times, you don’t know what the outcome of the race will be until the last few minutes.”

“(That qualifying session) was definitely tight,” said Johnson. “The first three cars were within 3/10ths of a second, so you can’t ask for much more parity and a competitive race environment than that. Thankfully, Scott was able to put together that awesome lap and put the No. 15 Shelby GT350R-C on pole for its first race. This Shelby GT350R-C is an awesome car. Even the Mustang GT, with its new independent suspension, is just such a leap ahead of the solid axle suspension from the previous Mustangs. Then, the GT350 just takes that a step further, with all the modifications done to aerodynamics, the suspension and the powertrain. That’s just turned it into a fantastic race car. I’m really looking forward to the race tomorrow.”