Emerald Cut - Not Just for Diamonds 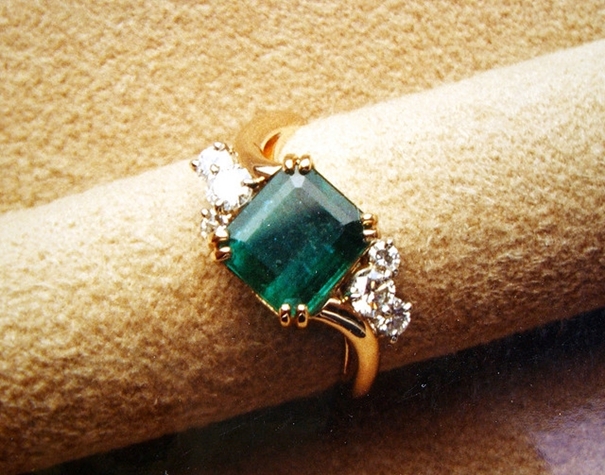 The emerald cut is arguably among the top 5 most popular diamond cuts. After all, Mariah Carey, Beyonce, and Angelina Jolie are just a few of the many celebrities that are shown in the media wearing their exquisite emerald cut diamond engagement rings. In addition to its current charm, this cut has a long and glamorous history with engagement rings, including Princess Grace Kelly receiving one from her fairy tale prince for their wedding back in the 1950’s. This makes

this style of gemstone equally beautiful in a vintage style setting as it is in a contemporary setting.

What Is The Emerald Cut?

The emerald cut is a rectangular shape stone, and has the following unique characteristics:

- Cropped corners around the crown - A series of long narrow stepped facets (hence the alternative name of “step cut”) along the pavilion. These appear as diminishing rectangles when looked at from the bottom. - Large flat table, or top surface, which exposes the interior of the stone more than any other of the popular cuts.

How Did It Get Its Name

As the name suggests, the emerald cut was initially designed for cutting green emeralds. In order to save as much of the original valuable stone as possible, this cut was designed to minimize waste and maximize usage. For this reason, it later became popular for cutting other gemstones, including diamonds. This style doesn’t rely on extra sparkle from multiple angles in the crown, as many other cuts do. Instead, it creates a more subtle lighting effect as the 58-60 facets create mirror like reflections of dark and light.

Not Just For Diamonds (or Emeralds!)

It turns out that this is an extremely attractive look for brightly colored gemstones, including not only emeralds, but also sapphires, rubies, aquamarines, and many others.

Because of the more simple parallel cuts, this style is usually less expensive than a more detailed cut such as a princess or round. As a result, for the same amount of money you may be able to choose a much larger stone. Look for a stone that is vivid and bold in color as well as clear of major flaws, as the openness of the emerald cut style will reveal the intensity of the hue, as well as any visible inclusions.

The elongated shape of this cut creates a lovely look of grace and elegance. A popular ring design is to have a large center stone, and then frame it on either side with one or more very small thin emerald cut stones, in the form of diamond baguettes. This is a beautiful way to further enhance your chosen colored emerald cut gemstone. Another striking look is to add a halo of small diamonds or other stones around your center stone to highlight it even more. Because of the elongated rectangular shape of the emerald cut, these usually look best on long or slender fingers. Of course, anyone can wear this type of stone and it will look just stunning. The qualities most associated with this type of stone are self, sophistication, and grace.