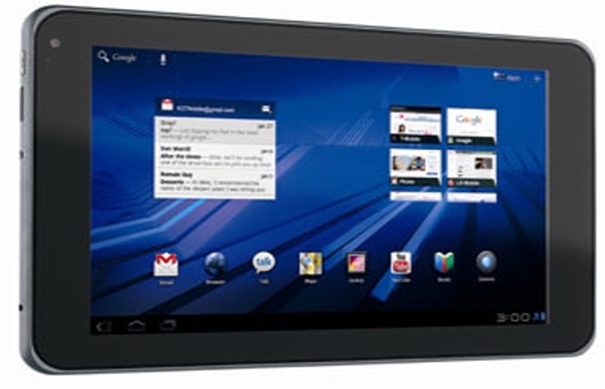 With its 8.9-inch screen, the T-Mobile G-Slate is noticeably smaller than both the 10.1-inch Xoom and the 9.8-inch iPad 2. The G-Slate is only slightly heavier than the iPad 2, but, like the Xoom, feels heftier, due to its odd weight distribution. The G-Slate has a thickness of 0.49 inch, a little over one-third thicker than the iPad 2′s 0.34-inch profile.
In landscape mode, its screen is as wide as the iPad 2′s, but is about an inch shorter in height. The G-Slate feels comfortable in our hands while typing, whether in landscape or portrait mode, and unlike the iPad 2 with its smooth-as-silk metal casing, the G-Slate isn't as likely to slip from our grip.

On its bottom side, the tablet has ports for Mini-USB and Mini-HDMI although not Micro-HDMI as on the Xoom. On the top are a volume rocker and microphone pinhole. Two speakers can be found on the right side, with another on the left. Also on the left are the power/lock button, a headphone jack, and the power adapter slot input.

Accessing the G-Slate's SIM card is a little more involved than doing the same on the Xoom. Theres a hidden panel on the back, requiring you to push down and slide it, revealing the SIM slot as well as the reset button underneath.

These days you can't have a tablet without a built-in camera, usually two. The G-Slate attempts to one-up the competition by including not only a front-facing 2-megapixel camera, but also a 5-megapixel 3D camera on the back. Technically, this is three cameras in all, although T-Mobile isn't really marketing it that way.

If you've seen pics of the back of the G-Slate, you may have noticed a narrow silver plate across it. You may have also assumed this stylish-looking plate doubled as a kickstand. It doesn't; its only function is to add a little design panache.

The G-Slate is the first Honeycomb tablet with out-of-the-box 4G support, courtesy of T-Mobile's network. The tablet also comes with T-Mobile streaming TV preinstalled as well as an on-demand service called T-Mobile TV, EA's Need for Speed Shift HD, Zinio Reader, and 3D camcorder and player software. Full Flash support is delivered via the Get Flash application, which will install Flash on the device within seconds.

The G-Slate also provides the usual tablet features, such as Bluetooth 2.1 support for audio and peripheral support (including Bluetooth keyboards). The Wi-Fi antenna supports bands up to 802.11n. Embedded sensors for screen brightness, accelerometer, and gyroscope are all included

A 1GHz Nvidia Tegra 2 dual-core mobile processor and 32MB of internal flash memory round out the specs.

The bad: Unless you have a thing for two-year contracts, the G-Slate is pretty expensive. 3D implementation is disappointing, and 4G drains the battery something quick.
back to top