The Fish We Cook, Monkfish and Tilefish 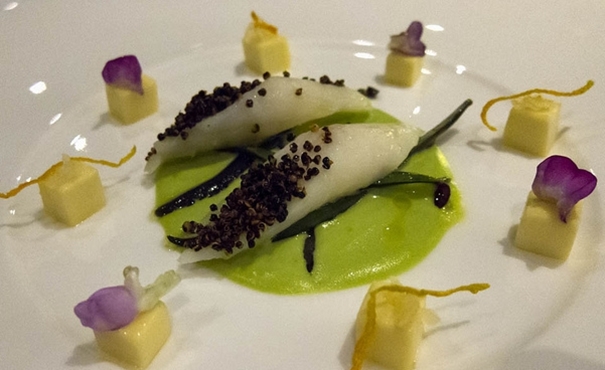 MONKFISH - A member of a family of fish called anglers; the monkfish is widely considered one of the ugliest fish in the sea. It can grow to 50 pounds and 4 feet in length and has a taste similar to cod and a texture similar to lobster. The monkfish has a huge mouth with a somewhat flattened body that is lacking scales. It has a long tube like tail that is the only edible section of the fish. The tail is boneless and has a texture and taste similar to scallops or lobster.
Also known as anglerfish, goosefish, ail mouth, frogfish and sea devil, the monkfish can be found on the Atlantic coast from New Found land to Brazil. The monkfish has a firm, chewy meat that has a mild, slightly sweet flavor and is low in fat. The best way to cook monkfish is to bake, broil, deep fry, sauté, steam or poach.

The tilefish is a brilliantly colored fish from the Atlantic Ocean that can be found from Nova Scotia to the Gulf of Mexico, being most abundant north of New Jersey. It is a fish taken both by sport and commercial fishermen at depths of 50 to 1500 feet. The fish basically takes on the taste of what it feeds on. The larger fish normally live in deeper water and feed on shrimp, crab, clams and lobster and take on a taste similar to crab and shrimp. This along with the fact that the larger fish have a firmer texture makes the tilefish more expensive per pound as the size increases. The smaller fish have a shorter lifespan and tend to get mushy. Known as the clown of the sea because of its color, the tilefish is iridescent blue-green with yellow and gold blotches and a white belly. It averages 2 feet in length and 5-10 pounds but has been known to reach 4 feet and up to 80 pounds. There are six varieties of tilefish and the golden tilefish is the most popular. The tilefish is a slow-growing fish with a lifespan of up to 46 years. Almost all tilefish is sold fresh. When raw, its meat is pinkish-white. After cooking, it turns white, firm and flaky with a mild distinctive flavor. It is a very lean meat that remains moist after cooking. The best way to cook tilefish is to bake, broil, pan fry, sauté, oven fry, poach or steam.

Hi! My name is Tom. I worked for 40 years buying and selling fish in the retail market. After years I found out people don't want complicated recipes for cooking fish. They want simple and easy cooking instructions. I have a site that lists and describes most types of fish found in the United States with recommendations and easy instructions on how to cook them. If you want to learn how to bake, broil, deep fry, oven fry, pan fry, poach, sauté or steam fish the easy way, check these out.