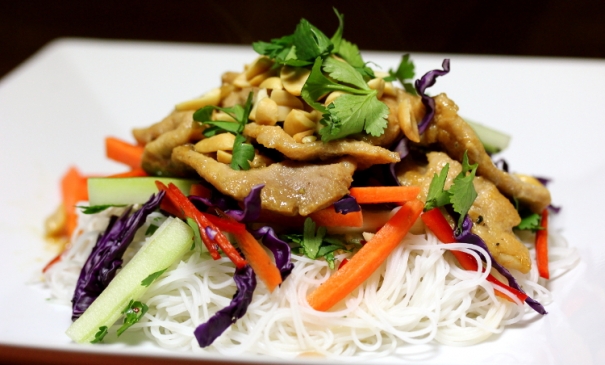 First of all, a small digression. Bali though is one of the islands of Indonesia, but in reality, culture, religion, and more tradtsii in Bali are quite different from the rest of the Indonesian islands. In this sense, Bali as a separate state within a large country. Together with its own religion and traditions, its own original cuisine . Balinese dishes are not so easy to find in the typical tourist places, this is primarily due to the fact that almost all Balinese dishes are complex and require a prescription from 10 to 24 hours to prepare. But if you try and know in advance the names of the main Balinese dishes, you will find places where they can try a snap.

Babi Guling
The most popular Balinese dish - it Babi guling (babi guling). Babi guling - a suckling pig on a spit, filled with lots of herbs and spices: shallots, garlic, ginger, turmeric, coriander, chilli, lemongrass, black pepper, shrimp paste, lime leaves and so on ... baked pig on a spit, and then it is cut separately zazharistuyu remove skin, cut meat, make cracklings, and from the internal affairs of blood sausage. All this is served with white boiled rice. Incredibly delicious!

Try Babi guling only in special cafes specializing in this dish, and it is necessary to come to the cafe in the morning until the pig is not over and there are still the best tidbits. A popular place where you can taste the Babi guling in Ubud, this cafe Ibu Oka in the city center.

Sate Lilit - skewers of seafood on a stick of lemongrass

Sate Lilit
Skewers of meat or seafood - satay (sate) - quite a popular dish in Indonesia. Satay grill on the grill on and served with peanut sauce, the smell of the barbecue sauce and make them taste unforgettable.

Bali has its own version of the barbeque, they are called Lilith satay (sate lilit) and they are made from minced seafood, mixed with popular Balinese spices (chili, turmeric, ginger and Kalgan candle nut tree, coriander and others) and strung on sticks lemongrass. Fried on the grill satay Lilith served with peanut sauce or chili sauce. This dish is especially popular on the east coast of Bali. A must try!

Bebek Betutu
Bebek betutu (bebek betutu) - This is another very popular Balinese dish. It is of itself a duck stew in a special Balinese sauce yellow. The sauce is made from a mix of different spices - turmeric, ginger, galangal, lumbangana, as well as nuts, coconut oil, onion, garlic and shrimp paste. At the sauce is very nice and unusual spicy taste.

For the preparation of this duck takes about 20 hours - so long it is baked in spices, wrapped in banana leaves, to buy very fragrant and delicate flavor taste.

Due to the long cooking this dish must be ordered at the restaurant at least for a day, it can be done, for example, in a restaurant Sobat, which is close to Seminyak Street Batu Belig.

Frankly, desserts, not the strength of Balinese cuisine, but to pass them all the same it would be wrong. They should try to at least have an opinion. In addition, there is a chance that you will find yourself among those rare people who enjoy these Balinese desserts. I know these people!

Lacquer varnish
Lacquer varnish like little pancakes made of rice flour, sprinkled with coconut shavings and poured syrup from sugar cane. Lac paints are usually white, but there are different colors, sometimes rather strange, for example, green.

To cook sweet pudding, black wild rice soaked in water all night, then add a bit of sticky rice and put it all to languish on low heat for about an hour. Then there add vanilla and palm sugar and leave until pudding thickens. Ready pudding sprinkled with coconut milk and sometimes sprinkled with coconut.

If you're lucky and you will visit the island of BaliComputer Technology Articles, we strongly recommend - to visit the class cooking and culinary tours in Bali.