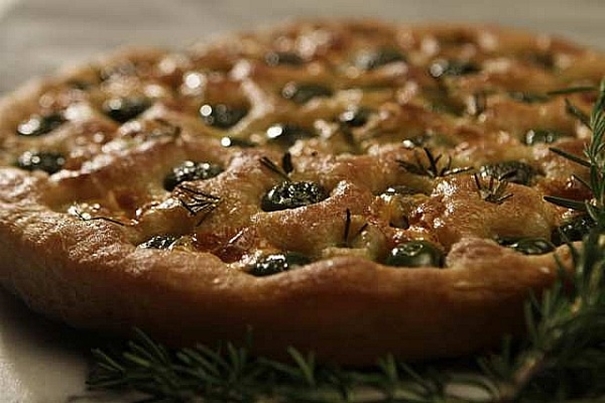 If you have been to Italy, you have probably heard about Foccacia. This is basically a kind of Italian bread that is oven baked and it is flat. This great tasting bread can be topped with a number of ingredients as well as herbs. In Italy, this bread is very popular and you are bound to find it in many a home or restaurant. It is often served along with salt and some olive oil. On some occasions, it can be served with some herbs as well as a number of other flavors.
In some instances, it is topped with some meat or even cheese and it goes quite well with a wide range of vegetables.

The Foccacia dough is one of the various components of this tasty bread and it is very much like the pizza dough. It is made of oil, salt, water, yeast and some high gluten flour. The making of this dough is in such a way that it is often pressed or rolled out using the hands. It is pressed into a layer of the dough that is thick. After this has been done, it is then baked using a hearth oven or it can be baked with a stone-bottom oven. On many occasions, bakers who are experienced at making this dough will use a knife to puncture the bread so as to prevent the bread surface from bubbling.

There are also some bakers who are fond of dotting the Foccacia bread. This is done so as to form some kind of depressions within the bread. This dotting is usually done with a finger or it can be done using any other item that can be used to create the depressions within the dough that is not yet baked. Olive oil is used to make sure that the bread's moisture is not lost. It is often spread across the entire dough to make sure of this. The spreading is done by hand or one can decide to use a pastry brush which helps to distribute the olive oil rather well.

If you want to find the best recipe, the you should definitely check Femina's focaccia.

In the Northern parts of Italy, there are some bakers who will use lard and have it added to the dough. This addition of lard is usually to give the Foccacia a somewhat softer texture. It generally makes the bread much easier to handle. There are a number of various procedures one will come across for the preparation of this bread. Today, there are many different recipe books that will offer varying procedures and with the many bread machines available, you can create some very good combinations. These bread machines often mean that you may not need to use your hands but rather use the machine to work with the dough recipes.