Stir Fry Cooking Is Now Perfectly Up To Date 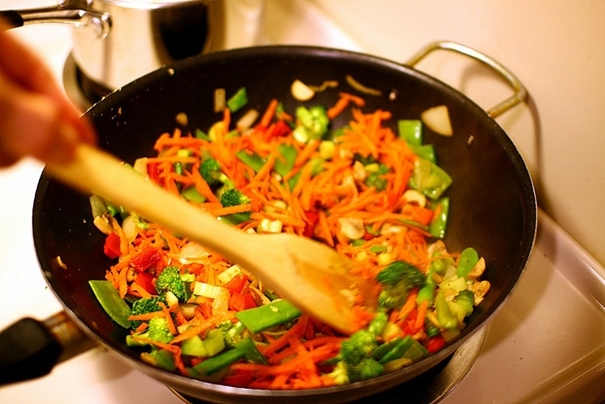 "There is no man who does not eat and drink but there few who appreciate taste", said Confucius. The Chinese must have taken that pronouncement to their very hearts.  They invented stir frying, an ancient cooking method of preparing meat and vegetables that ensures food will retain at its tastiest best, un-changed by elaborate cooking formulas and procedures.  It has been said that the chronic shortage of wood and other fuel in China is also responsible for the popularity

of stir frying and it makes sense, it takes only two or three minutes of cooking to turn out a main course for any number of people in the gathering.


Just because you don't have a wok doesn't mean you can't try stir frying, says Geoffrey Lee, owner of Allentown's Mandarin House Restaurant.   He admits that the wok is most efficient utensil for the task, but said an ordinary frying pan is an acceptable substitute although it distributes heat differently.  The shape of the wok makes the heat more intense and spread out through the entire interior of the wok.  The straight sides of frying pans cause the heat to go only upward, as he have observe.

Whether using a wok or a frying pan, forget the lid.  The main purpose of stir frying is to evaporate the moisture from the foods.  If the moisture is trapped by a cover, the vegetables will lose their color and crispness and the meat will pass the point of tenderness.   IN short, your food will be stewed, not stir fried.

Mr. Lee and San Cheung, both chefs, recently demonstrated the stir fry method used at Mandarin House.  So rapidly did Cheung work that blinking an eye meant missing two steps in the procedure.  The ingredients were transformed from a hodge-podge of raw summer and Chinese vegetables along with a handful of beef to a mouth watering completed dish in less than a minute.    It takes a little bit longer to do it at home, because the average home kitchen doesn't have access to the kind of heat they have in the Mandarin House Restaurant.

Foods should be cut into fairly uniform pieces before beginning the stir fry process.  It is the preparation that takes most of the time in the stir fry cooking method.  After washing the vegetables, be sure to shake off the excess moisture.  Too much water will make the steam in the cooking and your food will be steamed rather than stir fried.  The Chef also advises against stir frying frozen vegetables for just that reason.  There is just too much moisture in the frozen foods, and besides they are not fresh anymore.   But this advice is for commercial purposes, like restaurants and hotels and other food parks in the city.  Home cooking may require you to finish off leftover vegetables and be sure to unfreeze your vegetables and meat, shake off the excess moisture before you start to stir fry.

Happy cooking to everyone, and please continue cooking.  Create your own recipe using common sauces you can find in the web.