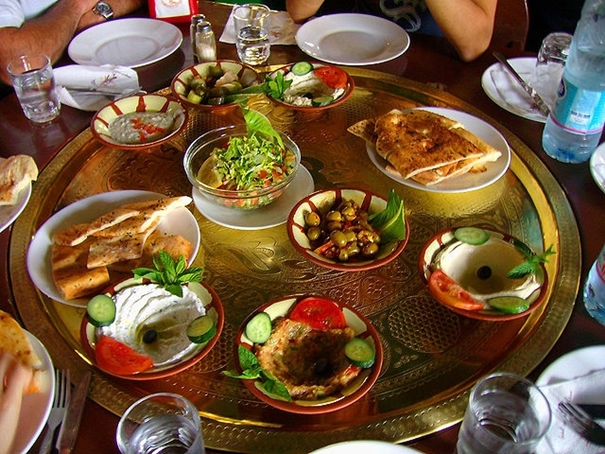 Arab cuisine Arab cuisine is the composition of several regional cuisines across the Arab world, starting from Tunisia to Kingdom of Saudi Arabia, and incorporating the Egyptian, Levantine and other societies and traditions.  History of Arab cuisine - Originally, the people of the Arab world heavily relied on a diet of dates, barley, rice, wheat and meat, and they put high emphasis on most of the yogurt products, such as labneh (yogurt made with no butterfat). Arabs give

Dairy products are extensively used in the Arab world, mainly white cheese and yogurt. Cream and Butter are also consumed by Arabs on a great level. Meat People of Arab world give most preference to the meat of chickens and lambs, but they use the meat of camel, goat and beef to a smaller extent. Other type of some poultry is widely used in several other regions, and the fish is also used in other areas such as coastal and seashores. Pork is strictly prohibited for Muslims in the Saudi Arabia, being because of both a cultural taboo and banned according to the laws of Islam; many Christian living in the Arab World prefer to eat the meat of Pork and enjoy the products of pork, especially Christians likes it who are residing in Lebanon, where cold-cuts of pork are often consumed in the Christianity neighborhoods.

People in the Arabian states use lentils on a wide scale and on the other side they also consumes others items such as chickpeas and fava-beans. Spices and Herbs Spices and Herbs also used by Arabs, they use spices for flavoring the foods or medicine but the quantity and types usually varies from area to area. Some of the mostly used spices and herbs are sesame, garlic, cumin, cinnamon, saffron, turmeric and sumac. Spice mixtures consist of baharat (blend used in Arab cuisine).

Arab cuisine also includes vegetables such as eggplant, onions, zucchini, cucumbers, okra and fruits which are also frequently used by people living in the Arab areas. Dates as well as Olives pomegranates and figs are also extensively used. Dates are a mostly vital staple in the Arabian diet, and they prefer to take it with coffee.

In Arab world, people prefer more hot beverages than the cold type of beverages; consumption of coffee is in the top list, it is mostly used in the Gulf Arab States. On the other hand, tea is also consumed in many Arabian countries. Like in Jordan and Egypt, tea is the most preferred hot beverage than the coffee.

Rice is the most liked item used for most type of dishes; wheat is the key source for baking the bread. Semolina and Bulgur are also used widely in the Arab world. Dressings and sauces The mainly well-liked dressings include a variety of combinations of lemon juice, olive oil, garlic parsley and tahini. Labaneh is regularly consumed with mint, garlic, onion and served as a sauce with different kind of dishes.

Mint and Parsley are well-liked as seasonings in many food dishes, while mulukhiyah and spinach are also taken in some other dishes. Particularly, many of the similar spices used in Arab cuisine are also consumed or emphasized in the Indian cuisine. This is a consequence/result of heavy historical ties and trading between the both two regions, and this is the reason many expats from South Asia prefer to live in the Arab States of the Persian Gulf.