How to get Quinoa NutritionWhen You Don't Love Quinoa 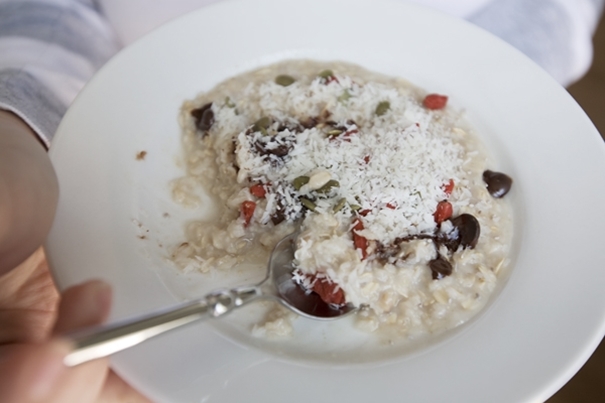 When it comes to food, flavour and nutrition often don’t exist in the same Zip code. Healthy foods mostly taste the blandest and the same goes with quinoa nutrition. Inspite of the many flavoursome recipes that I continue to post on this site, it's often a difficult task for me to convince my five-year old to dig into a quinoa salad. Or for my husband to relish the quinoa pilaf with as much gutso as he would a standard rice pilaf. As a parent, I have looked several times at the

government’s new nutrition icon and thought, "Really?" The image is a dinner plate divided into sections. Half the plate is full of fruits and vegetables. The other half is more of other healthy stuff.

Sadly, for my stubborn five-year old, there are no hot dogs, no burgers, no fries even.

And that is the paradox. What he likes is not what he should be eating.

The solution often is camouflaging, something that I've been doing successfully in quinoa muffins, quinoa puddings and my quinoa breakfast recipes. Not everything has to be mundane. It may be quinoa butt should have the thrill of a cheese-dripping burger.

I now plan to take this quest of nutritional disguise further with all the good stuff that I am now finding lining the supermarket shelves and much more conveniently on Amazon. It’s the quinoa pastas, quinoa noodles, quinoa flour and quinoa flakes that have caught my fancy.

The idea is to serve more interesting recipes using ingredients like pasta and spaghetti while they in turn are made of quinoa. The recipes turn out nearly the same way as they would with ordinary flour based pasta.

Only they are healthier. Rich in protein and full of fibre, quinoa ntrition makes them several notches above ordinary wheat based pasta.

For now my five-year old hasn’t figured out the camouflage.

Like ordinary pasta, quinoa pasta are also available in various cuts like penne, spaghetti and fusilli. With some effort, I could even find lasagne sheets made up from quinoa.

Preparation is often similar to how we treat ordinary pasta. ! just toss in some boiled quinoa spaghetti in a pan with some olive oil and throw in some chilli flakes and oregano with some salt and pepper. Spaghetti aglio olio is ready to eat. The variations and toppings that can go with it are up to your imagination. I usually throw in some cherry tomatoes, baby spinach, bell peppers and generous helping of parmesan cheese.

There’s also the versatile option of quinoa flour that may be used as a substitute for all purpose flour in muffins, pancakes, frankies, cakes and breads. Quinoa flour works wonderfully in pizza dough as well. Just roll out a dough made up of quinoa flour, spread some homemade pizza sauce on it and top it up with mozzarella - the pizza is ready to go into the oven for 20 minutes.

When you count flake-to-flake, quinoa flakes beat corn flakes and wheat flakes hands down. Just toss in some quinoa flakes in a bowl, add some hot / cold milk, a dash of honey and you have a healthy hearty breakfast or small tuck available at any time of the day.