A Valley Without Wind 2 Review 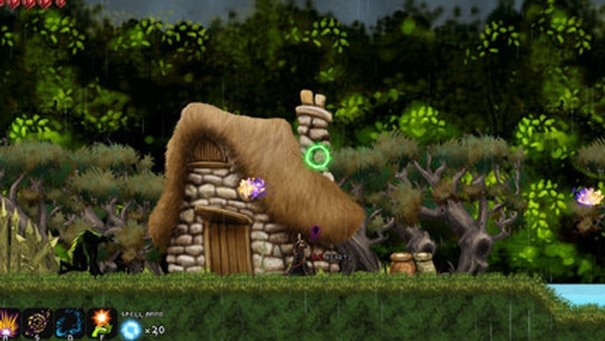 A Valley Without Wind 2 blends old with old to make something new and interesting. After committing a variety of unspeakable acts against your fellow man, you have finally gained the trust of the evil sorcerer Demonaica. Your reward for walking the path of darkness is a crystal that grants you immortality. Tarnished though your soul has become, you hope to use your new strength to destroy the very individual.

To persevere, you need to rely on both reflexes and intellect.
Despite featuring a rather conventional premise, A Valley Without Wind 2 stands apart from the crowd of similar action games by deftly combining a slew of platforming stages with what initially seems like a generic turn-based strategy interface. First impressions may lead you to dismiss the latter element as unimportant, but that would be a mistake. If you don't consistently pay equal attention to each aspect of play, you won't be able to complete the game, because your progress is frequently auto-saved, and a few critical mistakes can render victory impossible. If you're ready to embrace that unusual and rather demanding dynamic, you'll find a worthwhile experience that might surprise you.

As the game begins, a randomly generated world presents you with a number of colorful tiles placed near the center of a black expanse. A few units materialize as well, and you need to move them to available spaces where they can search for resources, rescue additional soldiers and scouts from captivity, and so forth. Troop deployment serves as only the first half of a phase, though. Once you have directed all of your soldiers, you can then enter an action stage. Those levels are also randomly generated, though some are similar enough to one another that you might believe otherwise. They tend toward large open areas that are a perfect playground for your character as he runs and leaps through passages and along ledges, hurling primary and secondary spells specific to his class, or slows down to avoid hazards like thorn patches and floating blades. Each turn concludes only when you reach the end of an appropriate area and destroy a waiting windstorm generator.
You can also enter previously visited stages without ending a turn, and look for loot that ranges from an armor pickup (which wears down and breaks over time, a sometimes annoying fact despite a landscape that overflows with treasure chests) to perk tokens and sometimes even blueprints that allow your character to gain additional moves that affect his mobility. A failed attempt at an action stage doesn't have sweeping consequences, but the resulting drop in army morale can make your troops less effective when facing the creatures that roam the map.

After each turn ends, you get to see how you did. Early on, the game babies you as it acquaints you with the rules. It walks you through exercises such as building shelters for your troops and turning grassland into farmland so that you can generate precious resources. You may be immortal, but your troops need to eat, and they need to feel satisfied that the resistance effort is going well. Otherwise, they won't fight effectively when monsters inevitably start arriving in waves that emanate from Demonaica's castle and from various other landmarks that may eventually enter the equation. You soon have to worry about the sorcerer himself, as well. He moves around the map and eliminates any soldiers that cross his path. If your army's population drops to zero, that's the end of the game—no matter how many hours you might have played—and you have to start fresh with a new world.