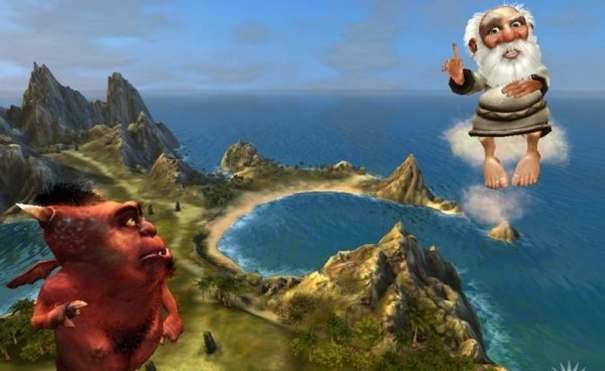 
For those waiting on Black & White 2, the good news is that the sequel is less open-ended and more structured. Indeed, this time there's a more coherent story, which makes it feel like a different game. However, this comes at the cost of some of the free-form gameplay that you may have loved from the original.

Like its predecessor, Black & White 2 combines distinctly different gaming genres into one game. You will construct sophisticated cities, raise armies and lead them into battle, and if that weren't enough, you get to interact with your giant creature, a sort of virtual pet that can also serve as your enforcer. There's so much in Black & White 2 that it's amazing it all blends together like it does. Though, it does go a bit overboard in some areas at times.

Black & White 2 is considered a god game because you play, well, a god. Specifically, you happen to be god for the Greeks, though that's not to say that you're a Zeus or a Hera or one from the traditional pantheon. The setting is in a fantasy world that happens to be occupied by the Greeks, the Norsemen, the Japanese, and the Aztecs. The Aztecs begin the game by sacking the Grecian capital, but not before you manage to spirit away a handful of survivors to a faraway land to begin anew. This story is a huge improvement over the first game, because it offers a cause to see to the end, as well as a focused enemy to take down.

As a god, you have a mutual relationship with your people. They worship you so that you can exist, and, in return, you provide for them and make sure that they flourish, which will increase your influence upon the world. That doesn't mean that you have to be a "nice" god, though, as the game takes its name from the fact that you can be a good and benevolent god, or an evil, bloodthirsty deity. For example, you require mana to fuel your godlike miracles, and this can be accumulated by getting your followers to worship you at an altar, or by picking up a random follower with your all-powerful hand and tossing him or her into the sacrificial fire. You can pick up and manipulate objects within your influence, and this also has a way of impressing the natives. If you need to construct a building quickly, you can tear out a tree and drop it onto the building's foundations. Or if you're a more patient god, simply pick up and drop a follower next to the thing you want done, and they'll get the hint.

With that said, it turns out that your primary job in Black & White 2 involves building cities. Indeed, the city-building constitutes a huge portion of the gameplay, and you can easily spend hours simply building up each city. There are two primary strategies, and both rely on building a formidable city. You can try to overwhelm your enemy peacefully by building a dazzling metropolis that causes his population to defect to your side, or you can create a huge city that supports a huge population, which supports a correspondingly large army, which you can then use to crush the other side. Or, as is often the case, you can use a blend of the two to achieve your means, conquering some cities peacefully, while conquering others through force.

The challenge with city design, of course, is that you're to build something complex in the space that you are given. Often, you have a limited amount of land to develop, as there are usually terrain features that prevent your city from expanding in certain directions. On top of that, you also must construct a city that you can defend, which means keeping the city inside defensible terrain, or constructing walls to keep invaders out. As with any city-building game, there are a large number of buildings and structures that you need to establish to support your population, like fields to generate food, homes, markets, and more. The choices you make have a cascading effect on the city. Put up a lot of hovels to house your expanding populace and you have an unhappy city. On the flip side, putting up mansions will be an inefficient use of what little space you do have. The idea is to balance your peoples' needs and to create something functional and pleasant (at least, if you're going for the peaceful victory). Meanwhile, if you're going for a militant victory, you still need to create an infrastructure to support large armies. This means fields to produce plenty of food, houses to support the workers, armories, and more.

The actual act of building cities is easy, thanks to the intuitive control scheme that lets you interact with the entire world with your all-powerful hand. The game tells you everything you need to know with helpful pop-up buttons, and you can satisfy the needs of your followers by just picking up what they want and placing it in the world. Need to build more houses? Simply grab an existing house, drag its outline to where you want to place a new one, and the foundations will be instantly laid for you. Or if you need to lay down a road, just grab an existing road and drag out the new road into the shape that you want. The entire control scheme is so elegantly thought-out that you hardly ever need to touch the keyboard.

While the city-building is at the heart of Black & White 2, it also feels like it drags on a tad too long. The first couple of cities that you build can be interesting, but by the latter part of the game, you realize that you're repeating the process over and over again. Most of what you're doing is waiting for structures to be built, or for your people to breed, or for a group of migrants to slowly make their way across the map to join your city. If you're trying for a peaceful victory, you're trying to shoehorn as many buildings as you can into your borders, a process that you've repeated in each prior level. This process can be prolonged, especially in levels where you're on the defensive the entire time. The enemy god can send an occasional natural disaster your way, which will force you to rebuild defenses, as well as anything else that was torn down. And while you can unlock a slew of new buildings over the course of the game, there's a certain point where you've unlocked pretty much everything and you're still building duplicates of what you've built before.