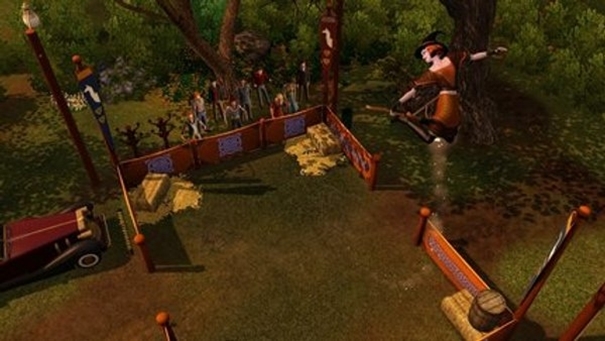 The Sims 3: Supernatural is filled with charm and ambition, but issues with zombies and lunar cycles cast a shadow over its best parts. The Sims 3 once tried to break away from the tyranny of the "normal" world with The Sims: Medieval, only to find that setting the franchise's signature gameplay in the Middle Ages sacrificed much of its creative freedom.


The Sims 3: Supernatural takes you on a similarly wild ride, but it benefits from a decision to remain rooted in the world you've created for your sims over the past three years. Here, the focus is on augmenting the core experience instead of attempting to redefine it. It's an approach that largely works despite some noteworthy flaws, and almost every new feature exudes a creative spark. There's a stranger lurking in the neighborhood, and while he may not always be the most charming of visitors, you should still invite him into your home.

The neighborhood in question is Moonlight Falls, a bosky mountainous village where vampires and werewolves rub shoulders much as they would in an episode of True Blood. It's not necessary to limit your experiments to the new ghouls and goblins in Moonlight Falls if you have busier households elsewhere, but the foggy meadows and varied Victorian architecture complement the ambiance of the expansion as a whole. The new lots are particularly nice, such as a supernatural hangout with monster-themed games and an elixir consignment shop, and it's fun to try out the new broomstick-riding skills at the riding course. Elsewhere, Supernatural excels in the little details, such as being able to creep out loved ones by telling them you watch them while they're sleeping, and the way fairies can die like moths if they get too close to a lamp.

The Sims 3 isn't exactly a stranger to spooky stuff--we first saw vampires in the Late Night expansion, for instance, and ghosts have been around since the beginning--but Supernatural allows for greater freedom with the concepts by stripping away a lot of the requirements that once accompanied them. Instead of waiting for a sim to die to make a ghost or get gnawed on to produce a vampire, you can fill your household with vampires and ghosts straight from the create-a-sim screen, along with other options such as fairies, werewolves, witches, and zombies. Even better, the create-a-sim interface now benefits from almost limitless color selections and a wide range of clothing and hairstyle options to complement your imagination.

The new additions enhance the Sims experience as a whole, to the point that your more realistic sims may seem outdated and mundane after a few hours with Supernatural. To count but a few of the new abilities, fairies can fly about and bless other sims with auras that calm or grant boosts to skills; witches can conjure valuable items with enough practice and dish out hexes and fire and frost spells; and werewolves can travel in packs and (much like dogs in the Pets expansion) can hunt down expensive hidden items. The only issue with the latter--apart from their annoying tendency to scratch up the furniture--is that their transformations get to be a pain, particularly since they abandon any activities in the queue they were doing the moment they feel the tug of the full moon.

Indeed, the moon takes on a new significance here, as indicated by the addition to the UI that tracks lunar cycles. It affects far more than werewolves; it also triggers initially amusing attacks of lunacy amid the local populace and cues the first appearances of zombies. And herein lies Supernatural's greatest flaw. Zombies push the limits of annoyance. You can't disable them in the settings, and you can't do much to stop them from damaging your homes and crops aside from avoiding them.

The Limited Edition provides the only way to directly attack them in the form of Plants vs. Zombies' signature peashooter plant, but its attacks are weak at best. Sometimes bugs cause the effects of the full moon to last for days longer than they should, which may lead you to turn off the lunar cycles altogether in the options menu. Doing so usually clears up the problem (even though the zombies still shuffle about), but it also seems like a waste of such a promising concept.
The good news is that Supernatural offers other options to make up for this slight, such as the new fortune-teller career. It's disappointing that there aren't other careers available, but fortune-telling provides plenty of memorable experiences by giving you the option of two paths: one that sets you in the role of a hack who merely guesses the fortunes of visitors, and one that grants you the role of a true soothsayer. On a more personal level, the new alchemist skill lets you gather ingredients and brew potions that can grant bonuses to yourself and other sims or turn them into zombies. It's worth pursuing, because it eventually allows you to change your supernatural type entirely. If you're sick of being a fairy, for example, you can concoct a complex potion that transforms you into a witch.

If you can look past the issues surrounding the zombies and the lunar cycles, The Sims 3: Supernatural provides one of the richest experiences the latest outing of the beloved franchise has offered in years. Its timing also couldn't be better, since such a rich and quirky take on the everyday lives of the sims may be enough to lure back players who lost interest over the previous six expansions. In its best moments, it presents a fresh experience without sacrificing the enjoyment of the game proper, and it reveals new and delightful surprises in every cobwebbed corner.