How to Make a Real Cup of English Tea 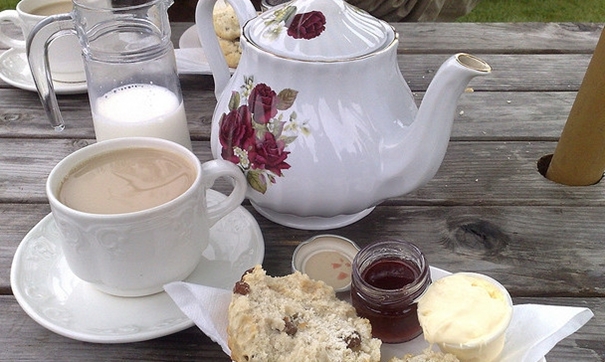 Since the rise of the humble teabag which was introduced to the UK by Tetley Tea in 1953, the art of making a real cup of English tea has been on the decline, with many ‘tea drinkers’ choosing to mash their tea in a mug. This article tells you how to brew a real cup of English tea, and urges people to dig out their teapot and engage in the social function of tea drinking. We also address the controversial issue of when to add the milk.


Since the rise of the humble teabag which was introduced to the UK by Tetley Tea in 1953, the art of making a real cup of English tea has been on the decline, with many ‘tea drinkers’ choosing to mash their tea in a mug. Of course back in the Victorian times, taking tea was more of an event; with the ‘tea maker’ even mixing a blend of tea leaves them selves. Interestingly, the first tea bag recorded was in around 1908. Introduced by a gentleman called Thomas Sullivan, from the USA. The Victorian connoisseurs of tea must have rejected the idea. After all, the Victorians enjoyed the whole event of tea drinking and chattering – why would they want to speed up the process?

To make a real cup of tea you will need…

A quality blend of tea leaves. Loose tea is best, however a good brand of tea bags will suffice. (Remember if the tealeaves were cheap – the tea will taste accordingly) If you choose to use leaves you will also need a tea strainer.

You will also need a kettle full of boiling water, a teapot, a teaspoon, a china mug or cup and saucer, milk and sugar to taste.

First pour around a quarter of a pint of the boiling water into the teapot. Put the lid on the teapot and swill the hot water around inside the teapot before pouring the water out of the spout and down the sink. This is called ‘Warming the Pot’.

Warming the teapot ensures that when the teapot is filled with water for making tea, that the water will remain hot and wont loose any heat tot he teapot. Keeping the tea water hot not only keeps the finished tea at an optimum temperature for drinking, but also helps with the tea brewing itself. Piping hot water aids the tealeaves to effuse.

Now pour on the boiling water. You should add enough water to fill everyone’s teacup. Put the lid on the teapot to retain the heat. Leave the teapot to stand for two minutes.

Then remove the teapot lid and stir the tea with a spoon. Replace the lid and again leave it to stand two more minutes. The tea is now ready for pouring.

China cups are best for drinking tea from, which is why the Victorians chose to drink from beautiful china tea sets. It just makes the tea taste better.

Controversy has arisen as to when the milk should be added to tea. Some people saying that the milk should be poured in first and others saying that the tea is poured first. Obviously as a nation we have got used to brewing tea in a mug. This way the tea is always added first. However, to make a real cup of English tea the milk is always added to the cup first, followed by the tea.

Sugar is than added last to taste. A sugar bowl is necessary because it largely depends on the size of the cup as to how much sugar you will take in your tea. The larger the cup or mug the more sugar you may need. Of course with just a small china cup you need far less sugar.

When the tea has been poured, the teapot should be again filled with boiling water in readiness for a second serving. Stir the tea and replace the lid and cover the teapot with a tea cosy to keep the tea piping hot. By the time you have drunk your first cup of tea, the second batch of tea will be ready for pouring.

We should bring back the art of tea making. It’s a relaxing social event that everyone young and old can enjoy. Funny isn’t it how we buy little girls pretty little tea sets to make imaginary tea for their dollies, and yet as adults we have removed the fun and we just sling a teabag in a mug. Join the campaign and dig out your teapot and treat yourself and your friends and family to a real English cup of tea and a chatFree Articles, today.

More: http://www.articlesfactory.com/articles/food/how-to-make-a-real-cup-of-english-tea.html
back to top