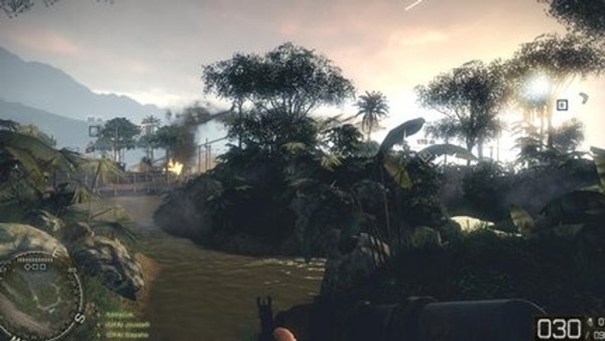 Calling Battlefield: Bad Company 2 Vietnam a simple map pack would be doing this add-on an injustice. On the surface, it would seem like a typical piece of downloadable content: four maps (a fifth is to come later), new weapons, and new vehicles all designed around Vietnam-era combat.


Yet while the destructible environments and silky-smooth game engine are clearly those of Battlefield: Bad Company 2.
This content changes the way you approach battle, stressing long-range combat less and forcing players forward into exciting ground combat scenarios that are among Bad Company 2's best. This shift in focus makes BC2 Vietnam feel terrifically fresh, and the new maps do their part to keep firefights intense while rewarding careful teamwork. Limited unlocks and a few technical problems keep the new content from having the same impact as the original multiplayer suite, but it you're in it for the action, there's absolutely no reason why you shouldn't attend this rumble in the jungle.

Some of the differences between vanilla Battlefield: Bad Company 2 and the Vietnam add-on are striking. Most obviously, there's less emphasis on long-range combat. The recon class retains scopes, but other classes must rely on their old-fashioned iron sights to get a more accurate shot. As a result, you are far less likely to get sniped by a medic or assault soldier using a conventional--but scoped--weapon. A lucky player can still land an annoying headshot across the map with an AK-47, but by and large, BC2 Vietnam is a more up-close-and-personal experience, and consequently, it's a more explosive one.

This isn't just because of the weapon adjustments, however; the superbly designed maps deliver the sense of a down-and-dirty skirmish between two sides fighting the terrain as much as they are fighting each other. The Hill 137 map is a fantastic example of how striking visuals and intricate map design make for intense firefights. The battlefield has been devastated by napalm. Flaming underbrush in the distance sends billows of thick smoke into the air, and dense dust thrown up from an exploding grenade clouds your view. Meanwhile, well-placed choke points force squads to the front lines, charging en masse and hoping to inch forward until they can take an important objective. The charred terrain gives snipers plenty of room to aim in some areas, while rocky hills, trenches, and rickety huts provide multiple ambush and flanking opportunities for other classes. There are also destructible structures that provide temporary respite, though this element (afforded by Bad Company 2's amazing physics engine) is not as prevalent as it was in the core game.

Rush mode showcases these features at their best. Numerous narrow passages lead to tense shoot-outs, and progressing from the initial bunkers into the flaming jungle beyond is a good reward for destroying an M-COM (communications) station. Rushes are a particular delight for medics, who become perhaps even more important than ever, reviving teammates getting mowed down at choke points or when greater expanses like those in Phu Bai Valley become littered with fallen comrades. That isn't to say, however, that BC2 Vietnam encourages you to rush forward without thought or consequence. Even with the greater sense of urgency such charges deliver, you have to consider your actions with care and stick with your squad when possible. Hurrying ahead might bring you face-to-face with someone wielding a flamethrower, one of many new weapons featured in the add-on. (Incidentally, if you're looking for a good close-quarters substitute for the shotgun, this is a good one in the hands of a skilled player. Getting flamed by a talented player causes your health to dissipate rapidly, though you can jump into the water if there's a lake or river nearby.)

There are three other maps in addition to Hill 137, with a fifth due to unlock once the player base has committed 69 million total team actions. On Cao Son Temple, a waterway winds around, giving you a back way into unprotected capture points. Meanwhile, you and a squadmate might jump into a patrol boat, laying suppressing fire while giving you quick transport down the shoreline. Just be careful: a good shot can make quick mincemeat of the pilot. And while ground combat is particularly stirring, vehicles still play a role, though not as vital or varied as in the previous visit to this setting: Battlefield Vietnam. On the Phu Bai map, Huey gunships are a formidable presence. On Vantage Point, a flame-spewing M48 Patton tank can be your best friend, especially given that antitank weapons are less varied. (The RPG-7 is the only real standby in this regard.) On the same map, a narrow bridge and a capture point at a central high ground keep the action focused and provide ample opportunities for both snipers and engineers to get down to business, provided other infantry offer the proper support.

Every class gets new weapons to play with and use of the flamethrower. If you enjoy Battlefield: Bad Company 2 for its rank progression and unlockable gadgets and weapons, you'll be glad to know that you gain rank whether you play Vietnam or vanilla BC2; thus, you unlock new weapons, gadgets, and specializations in the main game regardless of which you play. On the downside, you have access to every Vietnam weapon from the get-go, aside from the M1A1, so there's less sense of forward progress in the metagame than in the core game. Of course, if you've already reached maximum rank, you're here not for the unlockables but for the enjoyment. And as in the main game, Vietnam enhances your enjoyment with good visuals and fantastic sound effects. You could nitpick simple ground textures and various jagged edges among other visual foibles, but the game moves along effortlessly, with few hints of slowdown. The way the sunlight gleams through foliage softens the deadly destruction on Phu Bai, and splinters of wood fly about when a shell destroys the hut sheltering you. As attractive as BC2 Vietnam is, its visuals are surpassed by its marvelous sound design. The in-game radio is one highlight, playing such period tunes as "Wild Thing" and "Surfin' Bird," and nothing says "the '60s" like a good helping of Creedence Clearwater Revival. But it's the sound effects that make the audio truly special. The "thunk" you hear when launching a grenade is as distinctive as ever, and the subtle sounds of your footsteps in the underbrush mix with the overwhelming fury of Huey fire to great effect.

Since its launch, BC2 Vietnam has suffered from some problems with its stat tracking. Player ranks and statistics haven't always been accurate, though this is a mild annoyance, considering how much less important player progression and unlocks are to the overall experience when compared to the original release. Nevertheless, if you strayed from Battlefield: Bad Company 2 once you reached maximum level or are new to the game and want a good reason to show off your elite shooting skills, the Vietnam add-on is your ticket to big explosions, big shoot-outs, and big thrills. And you get it all for $15.