March of the Eagles Review 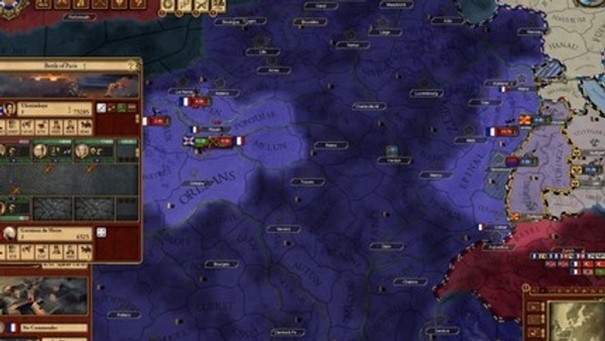 This Napoleonic wargame redeems its flaws with tense multiplayer matches that foster alliances as fragile as L'Empereur's. The Napoleonic Wars are a great setting for strategy games. After all, the conflict between Britain and France engulfed practically all of Europe from Iberia to Russia, revolutionized warfare, and spawned numerous temporary alliances in which vanquished enemies became (unreliable) allies.

Paradox Interactive, which previously released a Napoleon-themed expansion for Europa Universalis III, has delved into this period again with March of the Eagles, an accessible wargame with delightfully cutthroat multiplayer.

At first glance, March of the Eagles appears to be a grand strategy game akin to the Europa Universalis series. For instance, every province has a majority nationality, there is an "idea" system that includes techs that don't directly involve killing people, and numerous improvements ranging from roads to increased "development levels" can be constructed in provinces. But these systems are extremely misleading: demographics don't matter because oppressed peoples rarely revolt, conquering territory is a more cost- and time-efficient way of raising money than introducing your people to flush toilets, and idea points are mostly earned via combat (which leads to absurd situations like Napoleon learning how to lower interest rates after killing tens of thousands of Prussians). In short, March is not Europa Universalis: Napoleon. Instead, it's a more complicated version of Risk, played in real time, on a map so large that Russia alone has more than 800 provinces. Thankfully, only the less-numerous city provinces actually matter in the grand scheme of things, but Russia still has 88 of them.

While the sheer scale of the map may be intimidating, March is actually a fairly newbie-friendly wargame, but one that grizzled veterans can also enjoy. You can use brute force to smash a path to victory or indulge in more-advanced tactics. The basics are simple: your country produces money and men, and you can spend those buying a plethora of country-specific infantry, cavalry, and artillery brigades as well as naval vessels and supply wagons. Then you merge a group of units to create an army or fleet, put a historical general or admiral in charge, give other generals control over the army's flanks, and sally forth to conquer. If you don't want to do much micromanagement, then all you really have to keep an eye on is attrition and the security of your supply lines.

Alternatively, a little micromanagement allows for a much more refined and efficient approach. You can personally arrange the order of battle for each flank in an army and give every commander instructions that he will try to carry out in future battles. For example, you can order an army's left flank to use its cavalry as a shield and rush its other units to help hold the center, while making the right flank wait for the best moment to throw its elite guard units into the fray. Armies can also be given special orders for things like forced marches and scorched earth tactics. Careful use of these options can dramatically increase your country's effectiveness on the battlefield.
There is one truly aggravating aspect to March's combat. AI soldiers have a knack for escaping from battles before they can be annihilated. That isn't inherently bad, but they often retreat behind your lines and tend to bounce randomly around the map like Ping-Pong balls whenever you attack them. This was a problem in earlier Paradox games but seemed to have been fixed in its more recent titles. Thankfully, a large, well-managed army has a good chance of avoiding that annoying "feature" by quickly destroying enemy forces.

While the combat in March is, on the whole, quite satisfying, the flavorless single-player campaign is not. It just doesn't feel like you are fighting in the Napoleonic Wars. For example, France or Russia could win the game without ever fighting each other, because victory is achieved by occupying a set of country-specific provinces. Russia could easily win the game by preying on the Ottomans, Prussians, and Swedes while France is bogged down in a war with Great Britain. Also, there are very few historical decisions, so you can't exile Napoleon to Elba. Meanwhile, some of the game's historical events can occur without a logical reason. For instance, Tsar Alexander and Napoleon meet on a raft on the Neman River (as per their peace conference in 1807) even if they have never been at war.

March's multiplayer (which supports up to 32 players) is far more interesting, because it manages to capture the spirit of Diplomacy, the classic board game devoted to forging all manner of secret alliances and backstabbing your allies. As in that game, alliances are extremely useful but ultimately fragile because there can be only one winner. The trick is gaining other players' trust and exploiting their weaknesses at the right moment. For example, in one game, the Russian player was able to capitalize on an unnecessary war between Great Britain and Spain by secretly subsidizing both. This kept Britain preoccupied for years while a Russo-Austrian alliance carved up the Ottoman Empire. In secret dealings, Russia goaded France into attacking Austria by insinuating that the Austrians planned to attack France. The Russian player solemnly promised to fight alongside the French against the Austrian menace.
Once France declared war, the Russians stayed true to their secret accord with Austria and smashed the French armies. The French player quit after the Russians occupied Paris. Thus, Russia became the mightiest power in Europe. Had the French player invaded England during the Anglo-Spanish war and ignored Russia's "warnings," then things might have turned out differently. The random human element and intrigue make multiplayer a satisfying experience worth indulging in frequently.

Unfortunately, getting into multiplayer matches can be difficult, because other players are hard to find. Sometimes, you find people lurking in the metaserver's general chat, but oftentimes they are just waiting to continue a game with friends. It's best to arrange a match via Paradox's forums or through a Steam group. The only other problem is that if the host is using a router, she might have to engage in some port forwarding or put her router in DMZ mode. However, multiplayer is certainly worth such minor hassles.

In terms of its production values, March delivers what you'd expect from a $20 strategy game. The biggest disappointment is that the army sprites are ugly and each country uses its infantry sprite for every type of army, even a homogenous horde of cavalry. Furthermore, the terrain map is bland. Things would be more interesting to look at if important provinces had the occasional landmark, like St. Basil's Cathedral. The score, however, is great. The main theme in particular really sets an "I'm going to go trample over Europe with big armies" mood. There's only about 40 minutes' worth of music, which would be a problem in a longer game, but that is lengthy enough for a quick-paced game like March.